One of the things I love most about being a mother is rediscovering books from my childhood and enjoying them all over again with my daughters.

My childhood books were my dream catchers ~ my world view was woven from their threads. As we didn’t have a TV until I was in my teens, these vintage classics provided me with an entire cultural landscape. I still find the lithography and print styles of the 60’s and 70’s as evocative as perfume and the illustrations in these books are so familiar I could crawl inside them just as I did as a child. I realize that when I received stories as a kid, it was in an immersive way that I have since forgotten.

I love the poignancy of touching a crease made on a page forty years ago by the four-year-old me and the sense of continuity that comes when my daughter traces her tiny fingers over my name, the ‘S’ handwritten backwards in my childish scrawl, on the inside cover.

I adore my Kindle, but I know that the tactile world of books is leaving us and it makes me sad.

When I decided to compile a list of the vintage favourites my daughters and I have enjoyed, I noticed that every book featured a mother of some kind.

So while my own mother was reading Fear of Flying and the Female Eunuch, I was getting down with some of the greatest feminists of the era, many of whom had beaks. Here they are along with the notes I would have made to myself if only I had known how to spell at the time.

Synopsis: One reviewer at the time of publication in the 1940’s commented on the pre-feminist tone of this story of Mr and Mrs Mallard who search all over Boston for the perfect place to raise their family of eight ducklings; Jack, Kack, Lack, Mack, Nack, Ouack, Pack, and Quack.

Favourite quote: ‘”Don’t you worry,” said Mrs. Mallard, “I know all about bringing up children.” And she did.’ 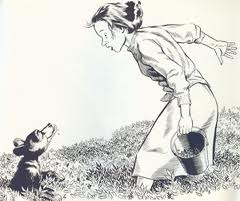 Mrs Blueberry: Fearless in the face of furry adversity!

Synopsis: The metaphorical tale of a tree (aka mother) and a little boy. The tree gives and gives and gives to the snivelling, ungrateful (my interpretation) little boy throughout his life until she (the Giving Tree) is just a tired old stump. This tour de force of martyrdom versus self-centredness is actually one of the most moving children’s stories ever written. If The Giving Tree doesn’t make you weep at the end, YOU HAVE NO SOUL.

Favourite quote: “And the tree was happy…but not really.”

Synopsis: Ferdinand the Bull likes to sit under a tree and smell the flowers instead of fighting like all the other bulls. His mum worries about him, but lets him be who he wants to be. Ferdinand caused controversy when first published as he was considered to be a pacifist symbol.

Favourite quote: “His mother saw that he was not lonesome, and because she was an understanding mother, even though she was just a cow, she let him just sit there and be happy.”

Synopsis: It’s New Year and The Basket Woman has come to collect gifts from all the families in the Long House. Little Runner wants to go and play with the big kids but his mum thinks he’s too little. Instead, he pretends to kidnap his Little Brother to try to trick his mum into giving him maple sugar.

Favourite quote: “It was cold in the longhouse…”

Synopsis: Frankly terrifying plot where a baby chick hatches while his mother is out searching for food. The baby chick leaves the nest in search of mum and ends up asking all kinds of creatures and inanimate objects if they are his mother including a scary dog and a giant digger that snorts at him.

Favourite quote: Mother: “Do you know who I am?” (The baby chick does indeed)

It's all about the headscarf for me...

So there you have it ~ my six vintage motherhood classics. I’d love to hear about yours.